The central stained glass window of the Reverend John Davenport preaching his first sermon in New Haven on April 25, 1638.  This stained glass window was designed by Joseph Lauber at Tiffany Studios (New York), and depicts the first Sunday worship for New Haven’s settlers in the wilderness of the Quinnipiack territory.

On that first Sabbath on April 25, 1638, the Puritan settlers gathered beneath an oak tree (near where today is the corner of College and George Streets).  The Reverend John Davenport preached on the text “Then Jesus was led up of the Spirit into the wilderness”, and it was believed that in the midst of the Long Island Sound wilderness, they were forming a new Jerusalem. 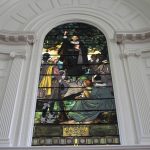 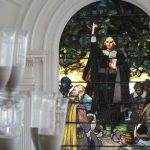 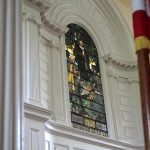 A large Waterford crystal and pewter chandelier provides a warm glow that lights the sanctuary. 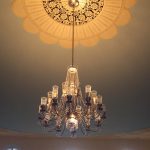 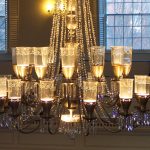 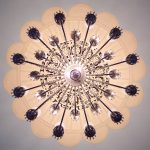 Located above the congregation and in the rear of the church, this massive and elegant pipe organ fills the air with beautiful music every week. 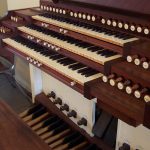 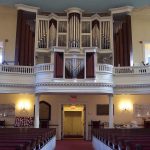 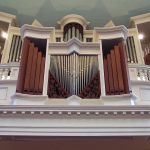 Beautiful padded wooden pews are encircled by tablets celebrating the lives of the eminent pastors of Center Church. 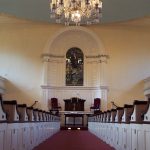 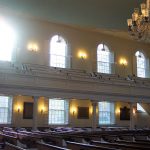 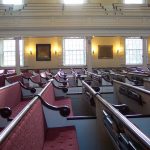 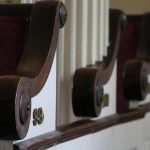 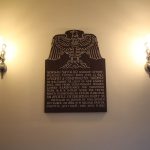 The exterior of the church is finished in traditional red brick and white wood.  The spire is a focal point.

The Parish House is a different, yet complementary structure. 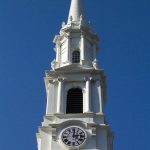 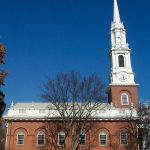 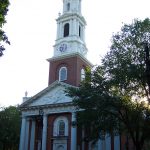 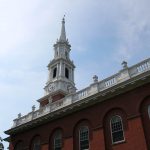 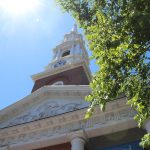 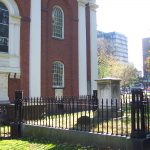 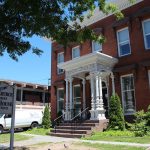